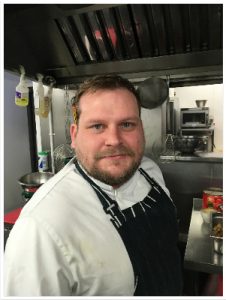 Catch Mike in the Theatre Kitchen Marquee as part of the BBC Radio Sheffield ‘Ready Steady Cook’ slot on Saturday 27th May at 11am, and again as a standalone slot on Saturday from 12:00 – 12:20pm.

Originally from Shrewsbury, Mike underwent his extensive fine dining training at The Walnut Club, Hathersage under Nick Wilson. After a stint of travelling and working in kitchens across the country, he returned to Sheffield and started working as Head Chef at The York, part of True North Brew Co.

Mike describes his style of cooking as ‘Modern British’ and is hugely inspired by Michelin starred chef Mark Sargeant. He praises Sargeant’s ability to turn cheaper cuts of meat and everyday ingredients into culinary masterpieces.

What Mike most enjoys about working at The York is the freedom to be creative. He enjoys growing the menu with innovative dishes and designs bespoke menus pairing ingredients with True North’s gin and beer for regular food and drink evenings.