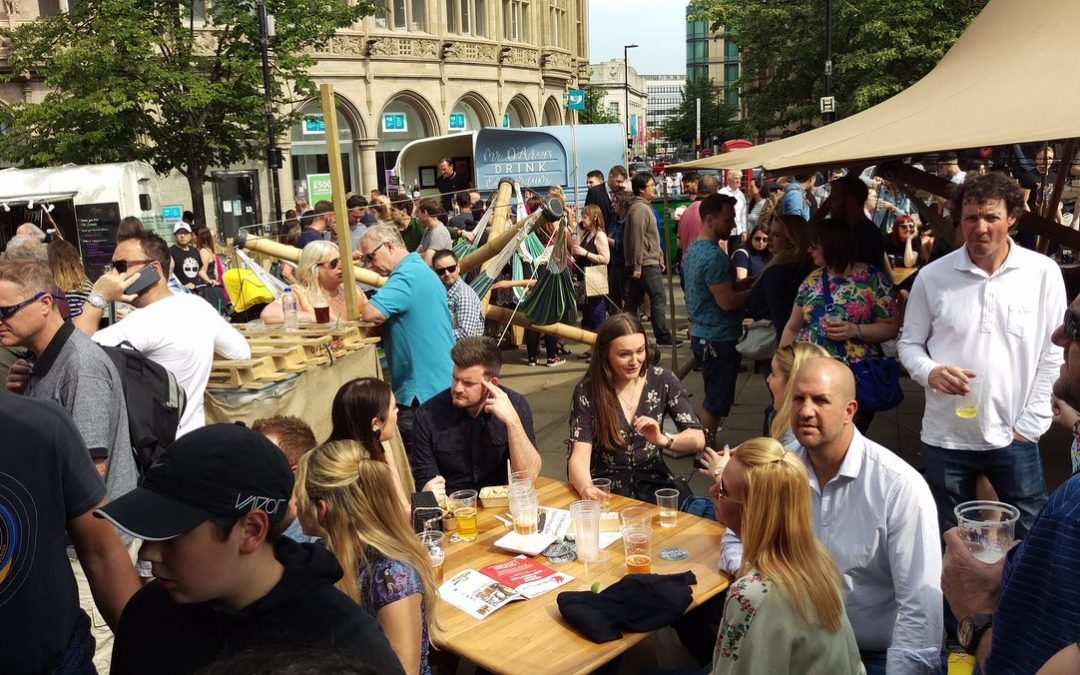 A recent additional to the Sheffield Food Festival is the Eats, Treats & Beats Festival Village. The heady mix of local beers, tasty street food and an eclectic mix of live music and DJs is proving a big hit. The village tent at top of Fargate keeps getting better, and this year promises to deliver.

For the Thursday, Friday and Saturday, we have teamed up with one of Sheffield’s most popular live music venues, O2 Academy. Since opening in 2008, the venue regularly gets involved in local events and supports local music in all its forms. So, expect a great diverse line-up of live acts and DJs for you to enjoy.

We get things going on the Thursday night with a playlist of the music the festival weekend has to offer. And here’s the line-up for the Friday and Saturday to help make sure you don’t miss out on the action!

FRIDAY 24TH MAY 2019
Quality Control are taking over the daytime and early evening as a warm-up for their show with KRS One down at the O2 Academy in the evening.

1:00pm – 7:00pm: QUALITY CONTROL DJ ANDY H Having honed his skills in the world of turntablism, Andy H applies his unique style of DJing to dancefloor bass-music while still remaining true to his hip- hop roots. As a UK DMC and Red Bull 3Style finalist, he champions the art of real DJing and channels that energy into every performance, kick starting any dance-floor.

7:00pm: ALANNAH Only picking up a guitar 18 months ago, Alannah has embarked on a rapid journey. With covers from The Beatles through to Yungblud and a unique tone and a flare for music, Alannah has the potential to be another Sheffield born star.

7:30pm: TOM STUART Indie singer-songwriter and guitarist based in Sheffield.

8:00pm: JUST ALFIE Inspired by the lyrical genius and soul-filled voices of Nina Simone, Marvin Gaye, John Mayer, Freddie Mercury, Alfie has come a long way since busking on the streets of Sheffield…

8:30pm: TYLER C With more than eight years of experience, DJ Tyler C isn’t one to stick to a singular genre, starting parties in Sheffield with sets ranging from funk, disco and D’n’B.

SATURDAY 25TH MAY 2019
Hosted by Sheffield’s own Just Alfie.

12:35pm: JODIE ROSE Performing a mix of country and rock, Derbyshire-based Jodie Rose has been performing live since her early teens.

1:05pm: DOG COFFEE In only a short time he has managed to make a big impact within the underground music scene, creating a grassroots fan-base and gaining notoriety through a DIY ethos and a catalogue of songs that deal with death, anxiety, and depression.

2:05pm: RACHAEL WEBSTER Incredibly talented wordsmith with a unique voice and a gift for creating beautiful and moving songs.

2:35pm: JAYRAR Chesterfield-based singer-songwriter known for his flexible and soulful voice, JayRar mixes songs from many different genres into a live lounge, stripped back sound.

3:35pm: SOFIA VAGO Combining 60s-style vocals and jazz influences, Sofia has been working with the likes of Razorlight and Modern Strangers on her new EP, but not before she stops by the Food Festival for the third year running.

5:45pm: MATIC MOUTH Since going solo, Matic Mouth has become something of a statesman for the local scene, frequently championing upcoming artists and cementing his own reputation via solo releases, working with hip-hop collective Clubs & Spades and opening stages for the likes of Public Enemy and Akala.

Along with an amazing choice of live music and DJs, plus tasty street food from the likes of SMOKE Barbecue and great local ales from Stancill, and Loxley Brewery, the Eats, Treats & Beats festival village is the place to be seen over the Sheffield Food Festival weekend!