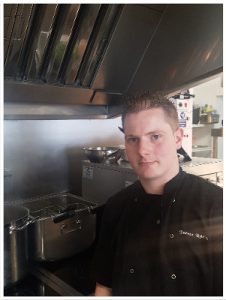 Darren is a longstanding member of the True North Brew Co. family having started in 2009 at the Forum and quickly became head chef at the Old House. He moved to the Blue Stoops when True North reopened this once iconic venue and runs regular themed supper clubs in the Byron Room.

He trained at Sheffield College before working for Sheffield International Venues (SIV) and catering for large venues such as City Hall and IceSheffield. He has also assisted Murray Chapman at the Sheffield based Skills for Chefs conferences.

Darren uses his wealth of experience to innovate the Blue Stoops menu. He loves to listen to his customers and has the freedom to deliver specials suited to the customers taste.