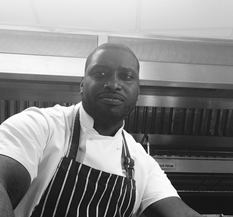 Local lad Seymour spent the beginning of his career in various 5 star hotels and rosette awarded restaurants, which include the Park Lane hotel London & Rhodes & co, Manchester. He was trained by Mick Burke at the Sheffield City College and still works closely with Mick and the college training up and coming local talent.

He has recently become A Master Chef of Great Britain, he sees this as a fantastic achievement and spends a lot of his time passing on his knowledge to his chefs giving them the real working environment that he was given while working at the prestigious Cutlers Hall.

At present, Seymour uses the solid foundations of his work ethic in his current role of executive development chef at Centreplate, working nationwide with the likes of Doncaster Rovers, Rotherham United, Sunderland FC & Liverpool’s Echo arena to name a few.

Seymour has supported Skills for Chefs for many years brushing shoulders with the likes of Heston Blumenthal, the late Charlie Trotter & Cyrus Todiwala.