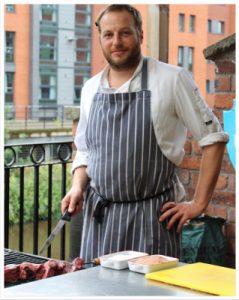 Catch Rob in the Theatre Kitchen Marquee as part of the BBC Radio Sheffield ‘Ready Steady Cook’ slot on Saturday 27th May at 11am, and again as a standalone slot on Saturday from 1:40 – 2:00pm.

Rob started his career literally on one leg as a pot washer at Lover’s Leap in Stoney Middleton. As his leg healed, Rob’s potential shone, as noticed by head chef, David Burt. Burt trained Rob and shared with him the training he received at the world renowned Three Chimneys on the Isle of Skye.

Rob aka Posh Rob admires celebrity chef of the nineties, Keith Floyd. Taking inspiration from Floyd’s focus on the produce he was using and looking at how and what people are eating all over the world.

Rob has worked at a number of upmarket restaurants in South Yorkshire, and has moved around True North Brew Co. developing his career. His latest challenge has been taking on the role of Head Chef at their newest venue the Waggon and Horses in Millhouses. Rob says the best part of his job is creating quality food using local produce such as pork from Moss Valley butchers.