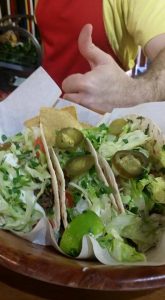 Tacos from the Street Food Chef

Make tacos with the Street Food Chef! An opportunity to learn about common Mexican food items, and taste a range of salsa’s, mild, medium and hot, hot, hot! Make a taco – Mexico’s most popular street food! Suitable for ages 6 to 11.

About the Street Food Chef: Abi Golland started the Street Food Chef with her husband Richard in 2010 – they realised that there was a gap in the market for a restaurant that served quick but healthy fast food. The Street Food Chef began life as an event business, but now operates 4 canteens and an outdoor catering business, served by a Central Production Unit. In five years they have won five Eat Sheffield Awards, as well as a number of mentions in the National Press.

The first part of Abi’s career was in the Early Years, for 12 years she worked for a private nursery chain, managing multiple sites with responsibility for quality and financial targets. Richard is a serial entrepreneur, having run the first vegetarian restaurant in Oxford and a successful construction company. They moved to Sheffield in 2006 – returning to Richard’s home city, they have 3 teenage children.

Abi and Richard try to apply the same values to their business and their leadership style; integrity, doing it properly, keeping it simple, look after each other and preparing the food with love.